(CLICK EACH OF THE PHOTOS FOR ENLARGEMENT – – Above photo, courtesy of Joerg Arnu, was of the second rally which was held in 1999)

RACHEL, NEVADA, June 6, 1998…….Believers of an American plot to unite the world against “UFOs” say such a concept is being generated at Area 51 and the result will be a fascist rule similar to Germany under Adolf Hitler. 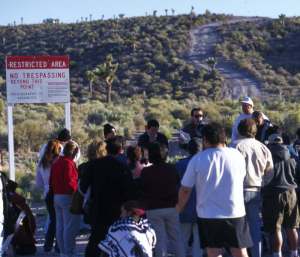 (QUOTE FROM THE ABOVE ARTICLE THAT APPEARED ON JUNE 7, 1998 ON LAS VEGAS REVIEW JOURNAL):

RACHEL, NEVADA — For the 150 people gathered at sunrise Saturday near one of the most talked about classified military facilities in the world, “Area 51” is home not to alien UFOs but to a good old American conspiracy.

The alien-UFO story, most of them now say, is government-concocted propaganda designed to throw people off the real story behind Groom Lake, as the military prefers to call Area 51.

(Above photo, courtesy of Joerg Arnu, was of the second rally which was held in 1999)

If they doubted themselves before they got to this roadstop 150 miles north of Las Vegas, they likely left more-convinced as the nearby rally fell under the steady gaze of federal park rangers, security guards on distant hills and unmanned cameras and microphones behind unmarked boundaries.

Assembled at 6 a.m. on the sixth day on the sixth month — symbolic admission to the devil’s work many said is being done here — they came from as far away as New York, Illinois and Oregon for the first People’s Rally.

(CLICK ABOVE FOR ENLARGEMENT – – Even though this 1998 event attracted only about 150 people, we were surprised that BLM Rangers participated, making sure that everyone was safe.  They even helped us with parking and made sure to alleviate the traffic on Groom Lake Rd. – – There was a large bus, as well as a large semi-truck.  We commended the BLM Rangers for their kind participation)

Organizer Norio Hayakawa, a funeral director from Gardena, Calif., called it a historic event that will grow.  His aim for the rally was to bring attention to the plight of 39 former workers who were denied in 1996 the right to sue the Air Force facility for harm they say they suffered from exposure to toxic chemicals.

“Three have passed away and the rest are still sick and not treated yet,” said Hayakawa, speaking with a bullhorn.  “We believe the workers have a right to be cured and treated for their diseases.”

He also proposed — and figured he was being listened to and recorded through the various devices propped on the hillsides — that the government create a fence around the base and a guard station at the fence.

“They have a $22 billion budget,” he said, referring to the “black budget” tax dollars that fund the research.  “So building a guard shack and fence should be no problem to them.”

While he tiptoed on the issue of the purpose of the research, he also cautioned that research at the base could be used against the American public.

“We believe they have a right to build weapons for the national defense,” Hayakawa said.  “But we believe they could also be used for surveillance on us in the near future.”

There was also James Whisler, 30, a heavy-equipment mechanic from Battle Mountain, who is simply a devout Christian convinced that the billions of tax dollars spent at the base are not for the protection of America but for its enslavement.

He wants to save as many souls as possible before that happens.

Sitting Friday night in the Little A’Le’Inn Cafe on state Route 375 in Rachel — in the background Hayakawa plays country western music on his electric organ — Whisler exhausts himself and overwhelms listeners with a barrage of fact and belief that encompasses everything from the design of the nation’s capital to John Lennon’s song “Imagine” as proof that a one-world Luciferian government is the goal of elitist Americans.

“This,” he said of Groom Lake, “is preparation for a deception that will come upon the world.”

In a nutshell, Whisler believes that elitists known as the Illuminati control the United States through the Federal Reserve, and with their fingers on the nation’s purse strings, they are using tax dollars to design UFOs to terrorize the world for the distinct purpose of unifying it.

“Create a common enemy to unite people of the world,” he said.

Once it’s unified, the goal is to create a fascist rule, much like Germany under Adolf Hitler, he said.

“If you were to take over the world, this is how it would be done,” Whistler said.  “The population of the world will be reduced drastically very soon.”

Syndicated radio talk show host Anthony Hilder showed more revulsion.  Wearing a magenta shirt and pants, he made a big impression in voicing his open distaste for the government under President Clinton.

“Can you imagine 100 Bill Clintons?” he asked, finishing a rapid-fire soliloquy on human cloning.  “It would be the establishment, literally, of hell on Earth.”

Another talk show host, Victor Camacho, arrived from Los Angeles with a bus load of listeners to his 1 to 5 a.m. radio program, “A Little of Everything.”  The group drove nine hours, stopping 30 minutes in Las Vegas, and got to the rally site at 2:15 a.m.

Mauricio Ramirez said he’s been interested in the UFOs since he saw one as a boy in Tampico, Mexico, 20 years ago.  He and the others planned to stay overnight Saturday and hike with Hayakawa today to a summit to view the base, which will be more than 20 miles away.

Michael Schratt, 29, a draftsman from San Diego, was versed on the high-tech aircraft believed under construction at the facility.  He produced scale models of what he said were Air Force flying saucers and other craft built upon information gleaned from public documents.

His ultimate interest is less apocalyptic than it is curiosity.  He wants to get into the base to see for himself what he’s only been allowed to imagine.

“I’d like those guys to just carry me in there,” said Schratt, looking up to a white security truck on a nearby hill.  “To get in, you’ve got to convince them you’ve got something that they need. That’s what I’m trying to find.”

As I stated earlier, I have to admit that in 1998 I was still very much into conspiracies: