Skip to content
HomeUFO culture and beliefs….why they’re so significant

Like the overwhelming majority of the world’s astronomers and scientists, I do not discount the possibility that we are not alone in the universe, even though we still have no definite evidence for it.

At the same time, however, the overwhelming, vast majority in the scientific community have been skeptical when it comes to UFOs as conclusive evidence that we have been (or are being) visited by physical aliens in physical alien spacecraft of any kind.

As far as I am concerned, the bottom line is that we have not yet been presented with any single globally accepted physical, tangible, solid, as well as irrefutable documentary evidence of such, so far.

And yet the UFO phenomenon seems to be real, according to researchers such as Dr. Jacques Vallee.

This is why I believe that the study of the UFO phenomenon definitely seems to have some intrinsic value.

Ufology is an important study and will continue to be so as long as the “UFO phenomenon” is not conclusively solved.

However, as for myself, I am more interested in the study of its culture and its diverse,  accompanying beliefs and the impact of such beliefs on society in general.

Such study (on UFO Culture and Beliefs) is far more interesting and significant than the seemingly illusive, never-ending pursuit of the UFO phenomenon itself.

As I have stated time and time again, the subject of “UFOs” is the most important subject matter that I can think of because it involves everything and even seems to affect one’s worldview.

It is a fascinating study about human psychology and the role of “beliefs” that poses the question “what is reality?”

Yes, “UFOs” have become a social, cultural and psychological phenomenon.

Some even say that such beliefs are much needed for some folks who may feel the urge to believe in something or something that gives them a sense of “hope” (in tandem with religious beliefs), especially in these troubling, uncertain age of global economic, social and political crises.

Add to all this the role of the Internet.
The Internet has revolutionized how information as well as misinformation can be accessed instantaneously.
For many folks among a segment of the society,  the Internet has become a cesspool of totally unfounded “facts” created by hucksters and hoaxters so much so that even college-educated folks seem to fall into it.  Such hucksters and hoaxsters have become so skillful in their “art forms” that it is becoming harder and harder for many folks to distinguish what is true information and what is misinformation.

(Also add to all this those who are propagating the UFO Industry, i.e., some authors, some UFO talk show hosts and many UFO Conference promoters.) 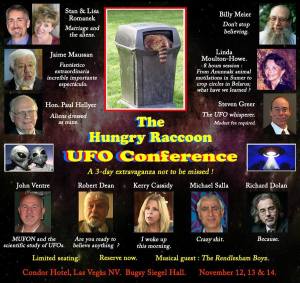 (A clever and funny, sarcastic poster of a typical “UFO Conference” created by Claude Falkstrom – – CLICK FOR ENLARGEMENT)

A question was raised by a reader: “Norio, as a point of interest – –what evidence supporting extraterrestrial visitation do deem credible?”

The only evidence acceptable would be the revelation of their actual physical spacecraft (i.e., if the phenomenon is fully physical), along with the revelation of its occupants in front of the global press, the global scientific community and the public-at-large at a globally recognized and viewable venue (such as in the lawn of the White House, or in Central Park or any publicly recognized venue), along with the total live global TV simulcast coverage of the revelation.

5 thoughts on “UFO culture and beliefs….why they’re so significant”