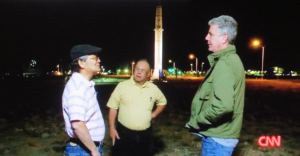 In 2013, I had a wonderful privilege of been interviewed by Anthony Bourdain when he came to visit New Mexico for his PARTS UNKNOWN New Mexico Episode.

At that time I was not aware that he had joined CNN and was not even aware that the title of his program was going to be PARTS UNKNOWN.

The producers asked where would be a good place for the interview.
I suggested the parking lot of the Nuclear Museum in Albuquerque, right next to Kirtland Air Force Base, since I understood that the topic with me was going to be about UFOs and extraterrestrials in New Mexico and about the our group called the “New Mexico UFO and Paranormal Forum”.

It was a perfect background because there was a tall replica of Redstone rocket there, alluding to the importance of rocketry in the U.S. and the beginning of post-World War II Space Age in New Mexico.

The interview was held way after midnight.
I believe that Anthony Bourdain and his crew were tasting some street tacos at a taco stand on Central Avenue that night, prior to our interview.

There wasn’t a soul in the spacious parking lot except for Lesley Gunter, writer for the UFO Magazine and who was instrumental in bringing Bourdain and his crew to Albuquerque.

At the parking lot, I explained to Anthony Bourdain the importance of rocketry and the importance of Sandia/Manzano Base inside Kirtland Air Force Base.
We also talked about UFOs.
He seemed to be very interested.

He said he was aware of the existence of Black Projects, as well as Operation Paperclip – bringing in of German scientists to the U.S.  (particularly to New Mexico)  after the close of World War II.

I was pleasantly surprised.

The person in the middle of the photo is Jim Brockway, aerospace researcher and friend of mine.

Anthony Bourdain was so natural and so authentic, just as I had seen him many times before on TRAVEL CHANNEL’s “No Reservations”.

I was so impressed.

Therefore it was such a shock to me to learn that Anthony Bourdain took his own life on June 8 in France while he was doing his another episode of PARTS UNKNOWN.
I still have a difficult time accepting it.

May you rest in peace, Anthony Bourdain !!