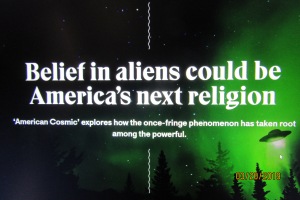 More than half of American adults and more than seventy-five percent of young Americans believe in intelligent extraterrestrial life, despite any conclusive evidence for it, so far – – it is no different from a religious belief, at this point in time.

An unquestioning belief in the existence of extraterrestrial life  (despite any conclusive evidence for it, so far)  is based on faith until it is conclusively proven.

This level of belief rivals that of belief in God.

There is nothing wrong in religion per se.

I myself strongly believe that God exists, only because of my personal faith in God.

Now, a fascinating new book by D. W. Pasulka, American Cosmic – UFOs, Religion and Technology examines the mechanisms at work behind the thriving belief system in extraterrestrial life, a system that is changing and even supplanting traditional religions.

Over the course of a six-year ethnographic study, D.W. Pasulka interviewed successful and influential scientists, professionals, and Silicon Valley entrepreneurs who believe in extraterrestrial intelligence, thereby disproving the common misconception that only fringe members of society believe in UFOs.

She argues that widespread belief in aliens is due to a number of factors including their ubiquity in modern media like The X-Files, which can influence memory, and the believability lent to that media by the search for planets that might support life.

American Cosmic – UFOs, Religion and Technology explores the intriguing question of how people interpret unexplainable experiences, and argues that the media is replacing religion as a cultural authority that offers believers answers about non-human intelligent life.

The aliens have landed.

Or at least, they’re about to.  That’s a reasonable takeaway when a renowned Harvard astronomer publicly declares, without apparent fear of repercussion, that he believes an alien spaceship may be orbiting our planet.

Belief in the little green men  (or tall, suspiciously Nordic, hyper-enlightened space brethren, depending on whose accounts you believe)  has long been a one-way ticket to social disrepute.  It belongs to the chainsmoking Nevada diner waitress, the virginal malcontent reading anti-Semitic lizard people websites in his mother’s basement, the aunt whose minivan is littered with pamphlets on lesser-known Marian apparitions and dire end-times prophecies, the bearded ’70s peace-and-love guru who later turned out to be a sex criminal.  It is precisely three steps above joining the Black Hebrew Israelites.

But that seems to be changing.

A new book by D.W. Pasulka — professor and chair of the department of philosophy and religion at the University of North Carolina Wilmington — American Cosmic: UFOs Religion, and Technology, focuses not on grassroots investigative societies or marginal cults, but on UFO believers in the halls of power.

Her narrative begins on a drive through the hills with pioneering computer scientist, venture capitalist, and ufologist Jacques Vallee.

“Silicon Valley is full of secrets,” he tells her.