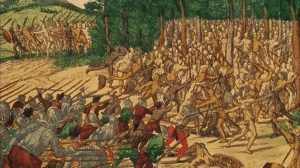 August 10th marked the 339th anniversary of the Pueblo Revolt.

Pueblo communities in New Mexico and Arizona commemorate the day with various activities.

The Tesuque Pueblo held an early morning run from the Pueblo to the plaza in Santa Fe.

“The significant part if you will, (is) the preservation of traditional culture.  If we didn’t revolt in 1680, we would not have the traditions and culture we have today.  The songs, the dances we practice today.

Living the life we were instructed to live, from the time we set foot upon this earth.  So for us Pueblo people 1680 is a date that will live in infamy as they say in history.  This event reminds us of who we are as Pueblo people.  So for those of you not aware of our culture, the Pueblo Revolt was the first revolution on this continent for independence from a foreign nation. T hat is the purpose of our event today.”

One hundred miles to the south, in the Pueblo of Jemez, Cliff Fragua considered how the Pueblo Revolt impacts his work and his life.  He has the distinction of creating an iconic sculpture of Po’pay.  It’s in Statuary Hall at the U.S. Capitol representing the state of New Mexico.  Fragua’s respect for the historical event is evident.

“I live it everyday, let’s put it that way, because I live here in Jemez Pueblo.  It’s a small community but we still retain our language, our culture, and our traditions.  I participate communally with the traditions when it comes to farming and ceremony and whatever traditions we follow.  I think it is really important that we continue those.  If the 1680 revolt had not occurred we wouldn’t be where we are at today and we wouldn’t have what we have today.

And I think it is highly important that we think about that almost on a daily basis.  We should be grateful and appreciative of such an occurrence to happen.  Although it got to that point, it had to happen for our survival as Pueblo people.”

In 1688, Don Diego de Vargas was appointed Governor of New Mexico, though he did not arrive to assume his duties until February 22, 1691.   He was assigned with the task of reconquering and pacifying the New Mexico territory for Spain.  In July 1692, de Vargas and a small contingent of soldiers returned to Santa Fe.   They surrounded the city and called on the Pueblo people to surrender, promising clemency if they would swear allegiance to the King of Spain and return to the Christian faith.   After meeting with de Vargas, the Pueblo leaders agreed to surrender, and on September 12, 1692 de Vargas proclaimed a formal act of repossession.

De Vargas’ repossession of New Mexico is often called a bloodless reconquest, since the territory was initially retaken without any use of force.   Later, when de Vargas returned to Mexico in early 1693 to retrieve a group of settlers, they had to fight their way into Santa Fe.   Warriors from four of the pueblos sided with the colonists, but most opposed them.   When the capital had been taken, Don Diego ordered some 70 of the Pueblo men killed.   Women and children were distributed as servants to the colonists.   Similar bloody fighting occurred at many of the other pueblos before the governor felt that the native people had truly submitted to his and the king’s authority.   The end of widespread hostilities did not mean an end to Pueblo resentment over continued heavy-handed treatment by the colonists.   The plundering of Pueblo stocks of corn and other supplies, to sustain the struggling colony, was a periodic occurrence that inflamed animosity. By the end of the century the Spanish colonization was essentially solidified.

THE 1680 PUEBLO REVOLT WAS ABOUT NATIVE RESISTANCE

“To celebrate Pueblo resistance as just a fleeting memory is contrary to combating the settler state today, and we cannot begin to take on the various issues that crush and kill us in our communities unless we name the systems that uphold them:  settler colonialism, capitalism and imperialism!!” – – Jennifer Marley

2 thoughts on “The first American Revolution took place on August 10, 1680 – – the Pueblo Revolt”