Skip to content
HomeIn the “new abnormal”, the government could enforce who you’re allowed to socialize with, via Tracking App !!

In the “new abnormal” of social distancing, governments could dictate who you’re allowed to socialize with and punish wrongdoers via a smart phone Tracking App !!

In China, authorities are using technology to track healthy people – – and those who pose a risk.

Residents are assigned color-coded QR codes on their phones.  The color determines what they’re able to do.  In Wuhan, China, where the lockdown has been lifted, residents need to produce a green QR code on their phones to leave their homes.

To get into places such as restaurants, people need to show a green QR code.

Now Apple and Google are working together to help US health authorities track exposure to the coronavirus using Bluetooth technology.

The tech giants could play an important role in fighting the pandemic despite privacy concerns.

Harvard’s Safra Center said people not in a “high-risk” population could move about freely.  Their location on public transport could be tracked on “privacy-protective QR scanning.”

Additionally, the center’s paper said, thermal scanning devices in public spaces “can help spot outbreaks and support contact tracing”- – tracking down sick people, isolating them and then tracing everyone with whom they’ve been in contact and putting those people into quarantine. 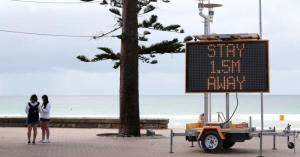 A plan from the liberal Center for American Progress called for a “trusted, nonprofit organization” to host the medical data – –  “not private technology companies or the federal government.”  The information must be automatically deleted after 45 days.

“The reality is your credit card company is already using this on you,” he said.  “You signed it when you signed the contract that was in the fine print there, and they were using for whatever the heck they wanted to do with it to make money.  And your phone is already using it.  That’s what all the phone companies do, they track you.  And lots of other apps on your phones do also.”

The Belgian government is considering permitting people to have a designated list of people they can visit in order to keep the risk of transmitting COVID-19 low.

Psychologist Dr. Linda Papadopoulos said that people who have been locked down for two months unable to see friends or family “will see it as progress and a welcome development.”

However, the proposal is completely unenforceable without draconian state monitoring and surveillance.

“From a psychological perspective, I am not sure that it works at all,” said Rory Sutherland, a behavioral scientist and vice chairman of the advertising agency Ogilvy. “Any group assembling could simply claim that everyone present was part of the same cluster, and without spectacular levels of bureaucracy, it would be impossible to establish the veracity of this.  It would re-establish the sight of large groups of people as a norm.”

“I think it falls into that category of “excellent science, bad policy,” he added.

And that’s where the tracking app comes in.

“Do not worry about the enforcement of these bubbles; the government could use smartphone app(s) to track and trace bubble violaters,” writes Zero Hedge.

It’s easy to envisage a not too distant dystopia of state-enforced social distancing where the mandatory app will deduct points from your social credit score if you venture outside of your house once too often or meet with an unauthorized friend.

By giving people the ‘privilege’ of allowing them to see a select number of friends, people are also being trained that they are getting rights back.

2 thoughts on “In the “new abnormal”, the government could enforce who you’re allowed to socialize with, via Tracking App !!”