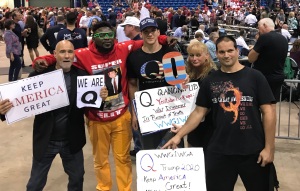 Conspiracies exist.   They have always existed.

“Conspiracy, a word derived from the Latin “to breathe together,” has been a salient part of the darker side of recorded history ever since some 60 conspirators in the Roman senate, including Brutus and Cassius, plotted together to assassinate Julius Caesar in 44 B.C.

Nowadays the “C” word does not always sit well with journalists, who commonly employ it in conjunction with “theory” to describe paranoid distortions of reality.

A criminal conspiracy is not a rare phenomenon.

Not only was a foreign conspiracy responsible for the monstrous 9/11 attack on the World Trade Center  (as well as the previous attempt to blow it up in 1993)  but, according to the Center on Law and Security at Fordham University, over 90% of routine federal indictments for terrorist attacks since 9/11 contain at least one conspiracy charge.

The government’s pursuit of conspiracies is by no means limited to terrorism.

Conspiracy charges are the rule rather than the exception in cases brought against businessmen accused of fixing prices, evading environmental regulations, using insider information or laundering money.” – – Edward Epstein, WSJ

BUT THERE ARE ALSO PSEUDO-CONSPIRACIES THAT EXIST ONLY IN A DELUSIONARY OR MISINFORMED MIND.

Here is the latest example.

What is the QAnon Conspiracy?

The QAnon conspiracy theory, which the FBI has called a domestic terrorism threat, is based on unfounded claims that there is a “deep state” apparatus run by political elites, business leaders and Hollywood celebrities who are also pedophiles and actively working against President Donald Trump.

At its heart, QAnon is a wide-ranging, unfounded conspiracy theory that says that President Trump is waging a secret war against the deep-state, globalist, elite Satan-worshipping pedophiles in government, business and the media.

QAnon believers have speculated that this fight will lead to a day of reckoning where prominent people such as former presidential candidate Hillary Clinton will be arrested and executed.

That’s the basic story, but there are so many offshoots, detours and internal debates that the total list of QAnon claims is enormous – and often contradictory.  Adherents draw in news events, historical facts and numerology to develop their own far-fetched conclusions.

It has accused many liberal Hollywood actors, Democratic politicians, and high-ranking officials of being members of the cabal.  It also claimed that Trump feigned conspiracy with Russians to enlist Robert Mueller to join him in exposing the ring and preventing a coup d’état by Barack Obama, Hillary Clinton, and George Soros. 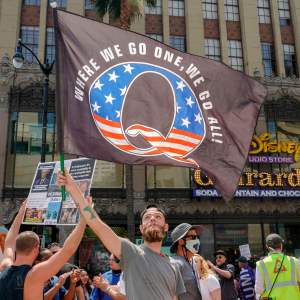 The QAnon conspiracy emerged on Saturday, October 28, 2017, on 4chan’s  “politically incorrect page”  in a thread called “Calm Before the Storm,” when an anonymous user signing off as ‘Q’ stated that “Hillary Clinton will be arrested between 7:45 AM – 8:30 AM EST on Monday – the morning on Oct 30, 2017.”  Q’s nom de plume is in reference to “Q” clearance, a clearance level in the United States Department of Energy.

(4chan is an anonymous English-language imageboard website. Launched by Christopher “moot” Poole in October 2003, 4chan hosts boards dedicated to a wide variety of topics, from anime and manga to video games, music, literature, fitness, politics, and sports, among others.  Registration is not possible, and the site’s users generally post anonymously; threads receiving recent replies are “bumped” to the top of their respective board and old threads are automatically deleted as new ones are created.  As of June 2020, 4chan receives more than 22 million unique monthly visitors, with approximately 900,000 posts made daily.

The site was created as a counterpart to the Japanese imageboard Futaba Channel, also known as 2chan, and the first boards were created for posting images and discussion related to anime.  4chan has been described as a hub of Internet subculture, with the site’s community being influential in the formation and spread of prominent Internet memes, including lolcats, Rickrolling, and rage comics, as well as activist and political movements, such as Anonymous and the alt-right.  4chan has often been the subject of media attention as a source of controversies, including the coordination of pranks, harassment, attacks against other websites and Internet users, and the posting of illegal content, threats of violence, misogyny and racism.  The Guardian once summarized the 4chan community as “lunatic, juvenile … brilliant, ridiculous and alarming“.

According to the site’s own statistics, the vast majority of its users are young, college-educated men with an interest in Japanese culture, video games, comics and technology.  Most live in English-speaking countries — the United States, Britain, Canada and Australia — but the site also sees sizable traffic from Germany, Sweden and France.  In late 2010, a 4chan user conducted a (wholly unscientific) survey of other site users, which found that, among other things, most 4chan users don’t discuss the site offline and most users wouldn’t let their kids join it.  The site’s founder urged readers to take the survey with “a massive grain of salt” — since the site thrives on anonymity, he pointed out, there’s ultimately no way to know who uses it with any certainty.)

However, QAnon finds its origins a year prior in the Pizzagate conspiracy theory, which alleges coded words and satanic symbolism purportedly apparent in John Podesta’s emails, hacked during his tenure as chair of Hillary Clinton’s 2016 U.S. presidential campaign, point to a secret child sex trafficking ring at a pizza restaurant in Washington, D.C., called Comet Ping Pong.  Pizzagate came to a head in December 2016 when Edgar M. Welch traveled from North Carolina “to the popular DC pizzeria Comet Ping Pong with a handgun and an assault rifle to ‘self-investigate’ the validity of the 4chan conspiracy.”  QAnon, beginning in 2017, thus originated out of the Pizzagate conspiracy theory, retaining the central belief that a cabal of powerful elites control the world, using their power to covertly abuse children.

Q’s claim on 4chan to have special government access and that he/she is part of a wider “anon genre” of government officials with top secret information is not entirely novel.  Before Q, several 4chan posters asserted they had special government access, including FBIAnon and HLIAnon in 2016, and CIAAnon and WHInsiderAnon in 2017.  QAnon devotees, many of whom may be familiar with this “anon genre,” thus are familiar with Q’s apparent need for anonymity and presumably take it as a sign of credibility.

In July 2020, nearly three years following Q’s emergence, there remains no consensus on who the original Q was and who manages the account today.  However, there is a fair amount of evidence that demonstrates how QAnon grew to prominence from the narrow confines of 4chan and 8chan.  According to a 2018 NBC News investigative report, the original Q post “would have gone mostly unnoticed if not for three people – Tracy Diaz, a YouTube vlogger, and 4chan moderators Pamphlet Anon, identified as Coleman Rogers, and BaruchtheScribe, a South African man named Paul Furber.”  NBC News reported that Rogers and Furber reached out to Diaz, asking her to leverage her large YouTube following to promote the first ‘Q’ posts.  Without sharing the 4chan thread with Diaz’ viewership, QAnon may never have grown beyond its small following on the image board site.

The authors have observed that QAnon supporters purport that their claims are empirical and do not ask that their assertions be taken at face value.  The QAnon community is guided by the oft-repeated maxim, “do your own research.” Imitating source citation and evidence presentation in academic scholarship, QAnon followers regularly engage in elaborate presentations of evidence to substantiate their claims.  In this vein, they often self-identify as investigative journalists or conspiracy researchers.

QAnon also represents a militant and anti-establishment ideology rooted in an apocalyptic desire to destroy the existing, corrupt world to usher in a promised golden age.  This position finds resonance with other far-right extremist movements, such as the various militant, anti-government, white nationalist, and neo-Nazi extremist organizations across the United States.  In February 2020, Omega Kingdom Ministries, in effect a QAnon church, was established in the United States and other countries where the QAnon conspiracy acts as an interpretive lens for the Bible and vice versa, and in which adherents are subjected to formalized religious indoctrination into QAnon.  QAnon followers share roots with conspiracy theories that have fed other anti-government movements, such as the 90s militias that feared the “New World Order,” or the anti-government apocalypticism and religious fervor of the Branch Davidians.

CONSPIRACY CULTURE IN AMERICA AND ITS SOCIAL IMPACT

CONSPIRACIES EXIST…..BUT DELUSIONAL CONSPIRACY THEORIES (SUCH AS QANON CONSPIRACY) ONLY EXIST IN THE MINDS OF THE MISINFORMED