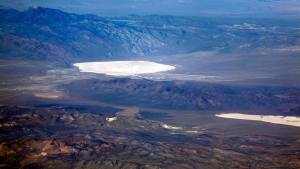 For me, it all began this way:

What got me first interested in Area 51 in 1987 was when I received from a Los Angeles-based writer named Bill Moore a copy of a satellite photo of Groom Lake taken by the Russians.  He sent me a ten-page research paper on the secretive military base.  I was quite fascinated by it.  Subsequently I met Bill Moore at one of his lectures in L.A.  In the same year, I attended a presentation given by Bill Steinman who had written a book entitled “The Crash at Aztec” in which a chapter was devoted also to the mysterious base in Nevada.

In October of 1988 I had an opportunity to watch an interesting two-hour syndicated TV program produced by FOX television entitled “UFO Cover-Up Live” in which Area 51 was briefly mentioned.  Also in October of 1988, a researcher by the name of Tal Levesque (a.k.a. Jason Bishop) showed me an interesting ad for Amoco Oil Company that appeared on page 50 of Aviation Week & Space Technology magazine in which it was promoting a new technology based on new composite materials that would “revolutionize” the aviation industry.  A weird thing was that there was a full-page color “portrait” of a grey “alien” right across from the page, i.e., on page 51.  A strange synchronicity indeed!

In the summer of 1989 I was listening to a late-night Las Vegas radio talk show  (the Billy Goodman show , which I could catch in L.A. area)  in which an alleged former government scientist named Bob Lazar was appearing almost nightly, talking about his work at a secret base just south of Area 51.

In early November of 1989 I made my first trip to Rachel, Nevada.  When I arrived there that evening, the Rachel Bar & Restaurant  (now known as the Little A-le-Inn)  was filled with people and was quite noisy.  There was a large party given by Billy Goodman.  Billy Goodman had come to Rachel with a huge chartered bus filled with his listeners who were interested in going near the place where Bob Lazar was talking about, even though Rachel was 25 miles north of Area 51.

In 1989 I also attended a MUFON conference in Las Vegas in which a wide array of “controversial personalities” such as John Lear, Bill Cooper, Bill English and Bill Moore were all giving presentations.  I was totally fascinated by all these events and personalities.  However, those days were my days of gullibility and immaturity.

In December of 1989 I was contacted by Nippon Television (NTV) of Japan to help produce a two-hour special program on Area 51 that was to be shown in Japan.  On February 21 of 1990, I took the Nippon Television team to Bob Lazar’s residence in Las Vegas to interview the so-called former “government scientist”.  After the 4-hour interview, Bob Lazar gave us instructions how to get to the point where we would probably see a test flight of the “craft”.

At sundown on Wednesday, February 21, the television crew of 8 and I set up several tripods right at the now-famous “black mailbox” at Highway 375  (at the 29 and a half mile marker, the so-called Mail Box Road).  We witnessed and documented on film what appeared to be a test flight of “something” over the Groom Mountains.  I was totally fascinated by what we all saw from a distance.

Subsequently the two-hour documentary on Area 51 was broadcast nationwide in Japan in March of 1990 and generated lots of attention there, when Area 51 was not even a household name in the United States at that time!  That was the beginning of my ten-year span of involvement in the research on Area 51.

I really wanted to get to the bottom of this mysterious base………what truly was going on over there.  Was there any extraterrestrial technology there?  However, those years were my years of naivete and immaturity.

I began a loosely-knit networked called the Civilian Intelligence Network, together with Gary Schultz of Santa Monica.  Since then I made countless trips to the perimeter areas, including climbing atop White Sides to view the facility from the distance in 1991, 1992 and 1993.  I also had an opportunity to Climb atop the Freedom Ridge very early in 1994 to view the facility before it was placed off limits to the public.

(CLICK ABOVE FOR ENLARGEMENT – – photo taken years ago by C.V. “U.S. Marine Corps for hire”)

In December of 1990 I even organized and led a 25-car caravan to Area 51 together with Gary Schultz and invited an L.A. Times reporter to cover the event.  The article appeared in March of 1991 in L.A. Times.

In May of 1991 a group of seven vehicles that I was leading came under dangerous harassment by a military helicopter (CH-53) on Groom Lake Road.  During those years, the anonymous security vehicles were all large Broncos and the omnipresence of security vehicles on various dirt roads on public land was quite intimidating.  We also had quite a number of run-ins with the Lincoln County Sheriff Deputies.  At that time Freedom Ridge was not known.

In 1992 I co-sponsored the first Need-To-Know Seminar at the Little A-Le-Inn with Gary Schultz.  The Little A-Le-Inn was filled with people  (standing room only)  that evening.  The only speakers at the Seminar were Gary Schultz and yours truly.  However, among the audience that memorable evening were John Lear, George Knapp, Bob Lazar, Bill Cooper, Sean Morton, Lincoln County Sheriff Dahl Bradfield and a whole wide array of personalities all under the same roof intensely listening to our presentation.

In those days I was very much into conspiracy theories.  However, I had a very different take on the subject matter.  My belief then was that there was nothing “alien” about Area 51, that the so-called “extraterrestrial” connection to Area 51 was just a convenient cover story brilliantly concocted and promoted by the “government” to conceal developments of new military weapons systems integrated with avionics and aeronautics technology.  Nevertheless I was categorized as part of the fringe personalities.

In 1993 Gary Shultz and I organized the first Ultimate Seminar in Rachel.  There were about 250 people that came from all parts of the U.S. for that seminar.  Bob Lazar was the main speaker.  He drove in from Las Vegas with his Corvette and his license number was MJ-12!  That seminar became his last public appearance, and remained so until fairly recently.  It was held at the parking lot of the Little A-Le-Inn under a huge military tent which Joe Travis later on, I believe, said that he had “borrowed” from the base!

It was around that year that Glenn Campbell, a computer analyst from the East Coast had settled down in Rachel to find out what was going on at Area 51, hearing all the commotions about the goings-on in Nevada.  He subsequently made an extensive research on the whole area, and became a major source of coverage in the major media concerning the “secret base”.  Glenn Campbell “discovered” the spot known as Freedom Ridge, the view of the facility from which was slightly closer than from White Sides. The rest is history.

Therefore I was one of several Area 51 activists during the pre-Glenn Campbell years, the years when Area 51 was still not a popular “secret” base as it is now.  Towards the late nineties my interest shifted to more realistic issues surrounding Area 51.  I became more interested in the plight of former workers at Groom Lake.

In 1998 I organized the first People’s Rally at Area 51 to bring attention to the media the situation of the workers and other realistic relevant issues.

In January of 2000, I decided to “retire” from further active research on Area 51.  I also began to abandon conspiratorial theories, realizing that Area 51 is a vital research, development and testing complex that is here to stay, no matter what.   It is so important to our national defense interests.

I met Joerg Arnu in San Jose in 1999 when I was giving one of my last public presentations on Area 51.  It was such a great pleasure to have met Joerg.  What a tremendous honor it is for me to pass along this seemingly endless but interesting research and pursuit on the nation’s fascinating premier R & D and test base to Joerg Arnu and his Dreamland Resort site http://www.dreamlandresort.com  and his excellent staff.

It has become the world’s largest, reality-based public online resource on Area 51 !!

2 thoughts on “My realistic thoughts about Area 51”