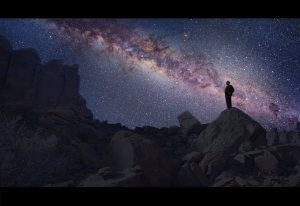 Before we discuss the strange, lingering UFO phenomenon  (which appears towards the bottom of this page), let’s first talk about the uniqueness of our Earth:

The Anthropic Principle states that the universe was especially suited for the well-being of mankind!!

“As just one of hundreds of examples, consider the tides that the moon causes on earth.
If the moon was closer to the earth, tides would be greatly increased.
Ocean waves could sweep across the continents.
The seas themselves might heat to the boiling point from the resulting friction.
On the other hand, a more distant moon would reduce the tides.
Marine life would be endangered by the resulting preponderance of stagnant water.
Mankind would also be in trouble because the oxygen in the air we breathe is replenished by marine plants.
We can conclude that the moon is in the “correct” position for man’s well-being.
Even such details as the mass of protons and the strength of gravity have values that give stability to the universe and thus reinforce the Anthropic Principle.
The Anthropic Principle is a powerful argument that the universe was designed“.

“There are hundreds of examples where this is shown to be true, and without going into extreme detail, here are just a few that lend themselves to the idea that the universe is especially designed for life on earth”
(Gary Bates, ALIEN INTRUSION, p. 111 – – 2004, Creation Book Publishers, Powder Springs, GA):

“*Stars and their distance from the earth:

Our neighboring stars in our Milky Way galaxy are nicely spaced apart so that they produce just enough light to be seen, but are not so close that they overwhelm us with dangerous radiation or gravitational forces.  On the other hand, if they were farther away, the night sky would be considerably darker, and the stars would not be so useful as navigational aids and markers for the seasons, which mankind has used for many centuries.

*The solar system’s position in the galaxy:

The solar system is located about two-thirds of the way from the center of the Milky Way.  If it were closer to the center, where there is a concentration of other stars known as the galactic bulge, we would be overpowered by their brightness, and nothing else in the universe would be observable.  If we were too close to the outer edge of the galaxy, the night sky would be too dark.

Our sun does not oscillate significantly in size the way many other stars appear to do.   This would make conditions unlivable on the earth.  The sun provides just the right amount of brightness to the earth and it is the perfect color (its wavelengths) for the job.  It has a yellow-white color, unlike many other stars of differing colors.  The peak intensity of its light is in the infrared spectrum, which provides warmth to all inhabitants of Earth.

*The earth spins at the correct speed:

The spin of the earth is ideal for producing day and night.  Longer days would cause a greater warming-up effect and, conversely, longer nights – – more cold.  A faster rate of spin would produce constant violent weather conditions.

The axis of the earth is tilted to an angle of 23.5 degrees.  This tilt allows the northern hemisphere to receive more sun from April to September, and the southern hemisphere from October to March, thus spreading the sun’s warmth over a greater part of the globe than if there were no tilt.  This seasonal change is absolutely vital for triggering the blossoming of plants and fruits, and to the courtship of some creatures.  If the tilt were any greater, the ice caps would melt in summer and flood the landmasses.  Any less tilt and the seasons would be less marked due to the reduced variation in temperatures.

*Perfect distance from the sun:

If we were 10 percent closer to the sun, the earth would have furnace-like temperatures, and 10 percent farther away would produce icy deserts.  Also, the oceans would boil off or freeze solid respectively, so there could be no life as we know it.

We are aware of the effects of reduced or increased gravity on the other planets in our solar system.  There is either too much or too little.  The earth is just the right size for its inhabitants.  Because of this, water remains in a liquid state.  Lesser gravity and the water would be lost to space due to the greater evaporation of cold water cause by lower atmospheric pressure.

Water covers 70 percent of the earth, via its oceans, rivers, lakes, and streams.  This arrangement (evaporation from oceans to form clouds that eventually cause rain to fall on the land) is unique within our solar system, and provides a convenient supply of fresh water for the earth’s life forms.

Earth offers a vast supply of resources, such as wood, metals, animals, plants, and a host of others that are useful for mankind.  In addition, Earth has the right conditions to permit the formation and maintenance of the ozone layer in the atmosphere to protect us.  It has a magnetic field which helps deflect harmful radiation from the sun.  The magnetic field also aids navigation for man and beast.  Our atmosphere is composed of just the right gases, unlike some of the noxious combinations found elsewhere in our solar system.”

As we discover more of these truths, though, we have a paradox because another mystery only increases – – that is, the UFO phenomenon.
Why is it that, when the search of space is decreasing the likelihood of extraterrestrial visitors, the circumstantial evidence for UFO sightings and alien abductions seems to be constant?
Could Dr. Jacques Vallee be right?
Are these creatures from another “reality”?    Or, from another “dimension”? 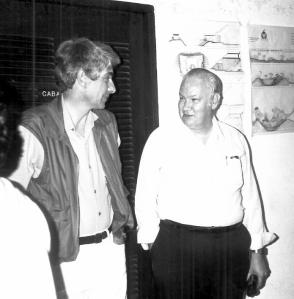 (Dr. Jacques Vallee with John A. Keel – – “Human beings are under the control of a strange force that bends them in absurd ways, forcing them to play a role in a bizarre game of deception” – Dr. Jacques Vallee)

As far as “UFOs” are concerned, Dr. Jacques Vallee may be right.
Please CLICK and READ the following important item:

UFOs MAY NOT NECESSARILY BE “OBJECTS” NOR COULD THEY BE “FLYING”

And, in connection to this topic, please watch:

Documentary film, THE ALIEN INTRUSION, which was released in January, 2018: 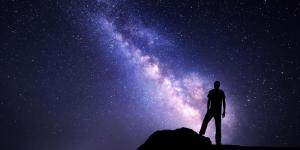 Are we alone in the universe?    Maybe, but it all depends on your personal cosomological belief.

We may not be alone in this universe.   But what does it really mean?

It all depends on each person’s interpretation of this statement.

“We are not alone” could mean different things to different people.   It’s all about terminology and each person’s cosmological belief.

Some folks who are skeptical about the existence of physical space aliens may still believe that God, angels and demons exist in this universe, physically or otherwise.  So, in that sense they could also say that “we are not alone”.

(I am in this category since I am a firm believer in the existence of a Supreme Being – – God, the Creator)

But when it comes to UFOs, the same vast majority seem to be skeptical that we have ever been  (or are being)  visited physically.   I agree with them again.

To me it takes more than a tremendous leap of faith to conclude that UFOs represent just such physical visitations to our Earth.

Yet the UFO phenomenon itself seems to be real.

Now, let’s talk about the UFO phenomenon itself  in general.

As I stated earlier,  the UFO phenomenon seems to be real.   There is no question about it.

By the way, the phenomenon itself is not new.

It has existed since time immemorial.

There are historical records of people seeing strange objects in the skies, throughout history, such as “flying shields”: 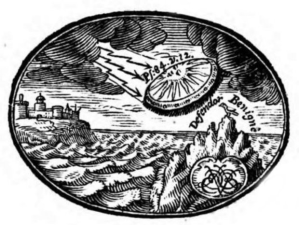 In the late 1700s and early 1800s, people reported seen strange objects that appeared to be huge, rather crude-looking airships: 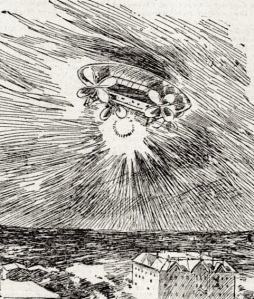 Later on, actual airships and other dirigibles were built by the U.S.

In the early 1980s when the U.S. was testing prototypes of stealth aircraft, there were many reports of humongous flying triangular craft over the East coast, which had nothing to do with prototypes being tested by the U.S. Air Force: 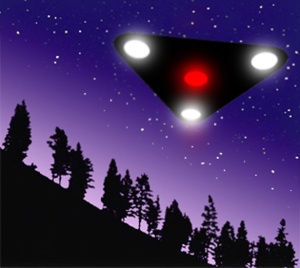 Reported humongous triangular craft  (sometimes reported to be 3 or 4 times the size of a football field)  hovered absolutely silently in the night skies. 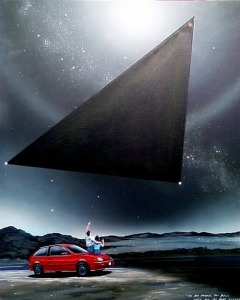 No, they did not belong to the U.S. Air Force.

To me, here is the bottom line – – and it may sound stranger and stranger.

The phenomenon appears to me as a temporary paraphysical intrusion into our physical dimension by an unknown intelligence or unknown sentient entitities, paraphysically materializing themselves to a pre-selected observer  (or a group of observers)  and presenting to the observer as a physical phenomenon.

(Great researchers such as Dr. Jacques Vallee, John A. Keel and Dr. J. Allen Hynek all seem to be in agreement here).

However, the phenomenon does not seem to be able to survive in our physical dimension except for a few seconds or a few minutes at a time.

According to these researchers, the phenomenon seems to be able to temporarily affect our physical parameters  (such as radar, etc.)

Yet the phenomenon also seems to be incapable of being photographed with clarity, if at all.

It is my belief that in this incredibly vast universe  (better yet, multiverse),  there exist what I describe as paraphysical sentient entities, both benevolent and malevolent types, (with a ratio of 2 to 1,  i.e.,  two out of every three entities are of benevolent nature). 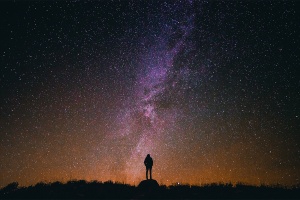 Eons ago, one third of all cosmic, sentient, paraphysical angelic entities were thrown out of their special domain by the Creator for participating in a cosmic-shaking revolt led by Lucifer who became Satan, and his followers “fallen angels”  – – as suggested in Revelation 12:4 – – many biblical scholars seem to support this interpretation.

They have co-existed with us since time immemorial.   It seems that the benevolent types are seldom seen in their temporary materialized form but it is my personal belief that they are doing good works  (without being visible),  often giving us protection from perilous situations. 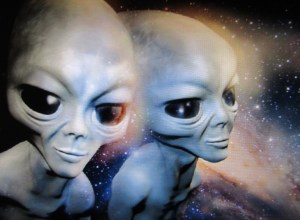 No, I doubt very much that they are extraterrestrial visitors from outer space – – but rather, a newly disguised version of extra-dimensional “tricksters” of old. 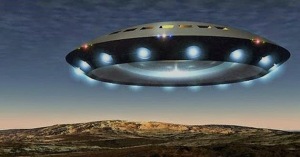 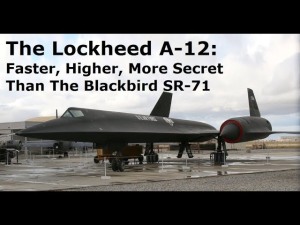 The use of designation “Area 51” may not have been too uncommon in the military for those “in the know”, even around 1967 when A-12s were deployed from the Nevada installation to Okinawa, Japan. 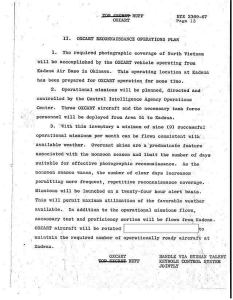 Later on, SR-71 Blackbirds showed their presence in Okinawa, Japan, even before Americans in the US knew anything about SR-71. 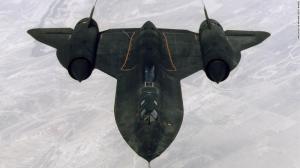 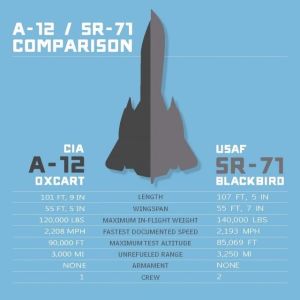 By the way here is an interesting photo taken in 1990: 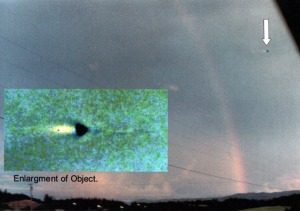 (CLICK ABOVE FOR ENLARGEMENT – – Was this a TR-3A aircraft of 1990?  – – July 12, 1990, over Willamina, Oregon, accidentally photographed by Larry Godsey.  According to Lone Wolf’s Lodge Trading Post, Larry Godsey, neighbor of Lone Wolf’s Lodge Trading Post, was taking the photo o the rainbow and later after he developed, he noticed the aircraft.  He says that he “finds it interesting because he saw a similar object shadowing a commercial aircraft in 1994”)

By the way, there has never been any conclusive documentation whatsoever for the official existence of U.S. Air Force’s TR-3A or TR-3B.